The result, dated JUNE 22nd 2020 has results already allotted to all six aspirants who have completed and submitted their purchased forms in expression of interest for the seat of number one citizen of the states include Pastor Osagie Ize-Iyamu, Mr. Godwin Obaseki (incumbent governor), Hon. Dr. Pius Odubu, Engr. Chris Ogiemwonyi, Hon. Osaro Obazee and Hon. Matthew Aigbuhuenze Iduoriyekemwen.

The incumbent Governor of the state, Mr. Godwin Obaseki emerges as second runner up in the yet to be conducted primary with 79, 861 votes behind Osaro Obazee who won 81, 173 votes in second place and Osagie Ise-Iyamu 101,533 votes to emerge as the flag bearer of the party in the forthcoming gubernatorial election in the state.

However, there have been talks between allies of the party that this sheet has been manipulated by the camp of the party national chairman, Comr. Adams Oshiomole who has not been in good term with governor Obaseki. Elsewhere, some quarters are also arguing that the camp of the sitting governor has come up with this to soil the image of the former governor. 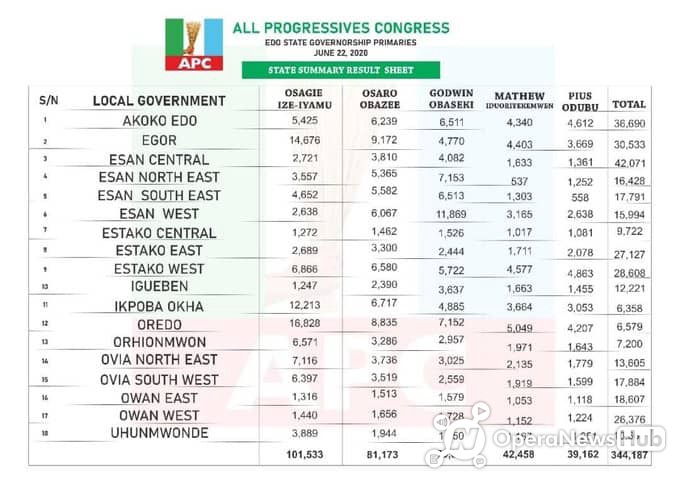 Recall that the Federal High Court sitting in Edo state earlier ruled out conducting of Direct Election in the state as maintained by the party, but INEC stands against that stating that they would only recognize result presented by the national leadership.

The Edo state forthcoming election has generated so much heat in the and with so much expectations, we await official statement from the two factions to either react or disclaim this as their handwork.