Nigerians head to the polling units across the nation’s 36 States and the Federal Capital Territory (FCT) of Abuja, to elect a President today, February 23, 2019.

There are 72 presidential candidates in this election and the front-runners however are: Atiku Abubakar of the PDP, Muhammadu Buhari of the APC, Kingsley Moghalu of the YPP, Fela Durotoye of the ANN and Omoyele Sowore of the AAC.

Stay with us and NAIJASURF brings you the live update of events surrounding the election as they unfold across the country.

Buhari vs Atiku: Nigerians reveal who they voted for
Some Nigerians on social media have revealed who they voted for in the ongoing presidential election.
The Nigerians also expressed optimism that their choiced candidate will emerge at the end.
Atiku Abubakar, a former Vice President, is the main challenger of President Muhammadu Buhari of the All Progressives Congress, in the 2019 election.
The social media users, who have already cast their votes in different locations, are hoping that they do not regret their actions in the next four years.
DAILY POST collated the following comments from social media users who cast their votes on Saturday:

The vice presidential candidate of the Peoples Democratic Party, PDP, has lamented about the electoral process during today’s presidential election.

Obi, while casting his vote at his polling unit at Umadimakasi Square, PU019, in his hometown in Anambra State, described the voting process as ‘clumsy and time-consuming’.

He, however, raised alarm over harassment of bigwigs of PDP on Friday night, including himself, describing the harassment as ‘trouble’ for Nigeria.

Addressing journalists after voting, Obi said: “Well, I can’t tell you I’m not tensed but this thing is still a bit clumsy for a lot of people. See the time it took for us to go through this voting process.

“Even the inks were not proper but I still have faith in the process even though it’s not perfect from my experience. However, it’s too early to comment on the election.

“It is true that some PDP bigwigs were whisked away by security agencies, some were harassed including myself. This spells trouble for the country.”

Nigeria decides 2019: What Atiku said after voting in Adamawa

The wife, Titi, accompanied the former vice president at 10.06am at Jada local government area, in Adamawa State.

On if he would accept the result if he is not the winner, Atiku said he is a ‘Democrat’ although epressed optimism that he will emerge winner and await successful transition.

“I look forward to a successful transition, I am a Democrat and would accept the result.”

Gov. Ortom of Benue State has just voted at his polling unit in Gbajimba.

The governor who voted alongside his wife, Eunice, expressed confidence in the process but lamented the arrest of the state agent by security forces in the early hours of the day.
He said he was arrested with no justified reason.

This is as some residents have already cast their votes.

A delighted resident of Uwani, who cast her ballot at Uwani Ward 4, in Enugu South told DAILY POST, “I’m so happy, I have voted, the process is simple.”

Meanwhile, our correspondent spotted a team of presiding officers, made up of corps members, heading to Opi, in Nsukka Local Government Area, on motorbike.

The corps members said they could not get a vehicle that would convey them to the unit.

There is a large early turn out of voters at the Jabi primary school. As at 9.34am, electorate are already queued up to cast their votes.

The Presidential candidate of the Peoples Democratic Party (PDP), Alhaji Atiku Abubakar, is yet to cast his vote at his polling unit of Ajiya in Yola North Local Government Area of Adamawa almost one hour after the commencement of the Presidential and National Assembly elections nationwide.

The News Agency of Nigeria (NAN) reports that voting has commenced in earnest at the unit and other centres across the metropolis.

Some of his aides who arrived at the unit, however, said the PDP flag-bearer “`should be coming any moment from now”.

President Muhammadu Buhari has insisted that he will win Saturday’s presidential election and then congratulate himself for the electoral victory.

The president said this after casting his vote at 8:05 a.m. in PU003, Sarkin Yara ward, Daura.

The president was reacting to questions on whether he would congratulate the winner of the election if he failed to emerge victorious at the end of the exercise.

Buhari, who stressed that he would surely win the election, expressed satisfaction so far over the conduct of the elections, saying “so far so good, everything is going smoothly’’.

He commended the electorate for their orderly conduct so far at the polls.

The News Agency of Nigeria (NAN) reports that Buhari and his wife, Aisha, were the first to cast their votes at their polling unit in Daura.

They arrived at the PU003 at Sarkin Yara ward at exactly 8 a.m., and they were accredited immediately without hitches.

Aisha was the first to vote after which her husband voted.

When he came out of the cubicle, Buhari was clearly heard jokingly telling his wife that, “I had to peep because you are from Adamawa”.

President Buhari’s main challenger, the candidate of the Peoples Democratic Party (PDP), Atiku Abubakar is an indigene of Adamawa.

President Muhammadu Buhari and his wife, Aisha, voted in Daura, Katsina State in the Presidential and National Assembly Elections.

After voting, the president expressed satisfaction with the state of affairs and said he was optimistic of winning.

Voters checking their names and Corp members arranging the cubicle

In Sokoto state: PU33/16/11/004, S/ADAR GANDU WARD. SOKOTO NORTH. INEC Staff have commenced at the PU. There is large voters turnout. It is peaceful. Security officials are present.

In Enugu state: ABAKPA I, ENUGU EAST. Polling materials and Ad-Hoc Staff still at the RAC in Okpa Village.

In Ebonyi State, INEC ad-hoc staff are yet to depart for their various PUs as distribution of election materials are ongoing at the RAC in Izzi Unuhu ward Abakaliki.

INEC official tells Pulse that collation of results will start by 6:00 pm on Sunday, February 24, 2019.

Omoni Oboli arrives her polling booth as early as 6:00 am

Reports of multiple explosions in Borno state ahead of presidential election

PDP threatens to pull out of peace accord 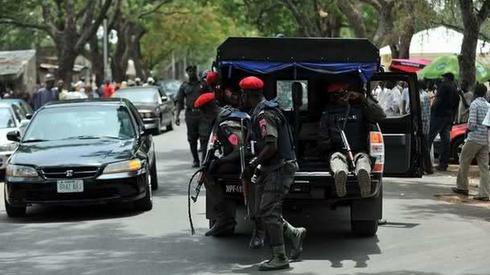 Nigeria decides 2019: Why some polling units are not opened – INEC

Google speaks on nation’s currency at ‘N184 to dollar’