Mo Salah joined the likes of Didier Drogba and Samuel Eto’o as one of the few Africans to have scored in a Champions League final as Liverpool beat Spurs by two goals to nil to win their Sixth European title, overtaking Barcelona and Bayern Munich in the process. 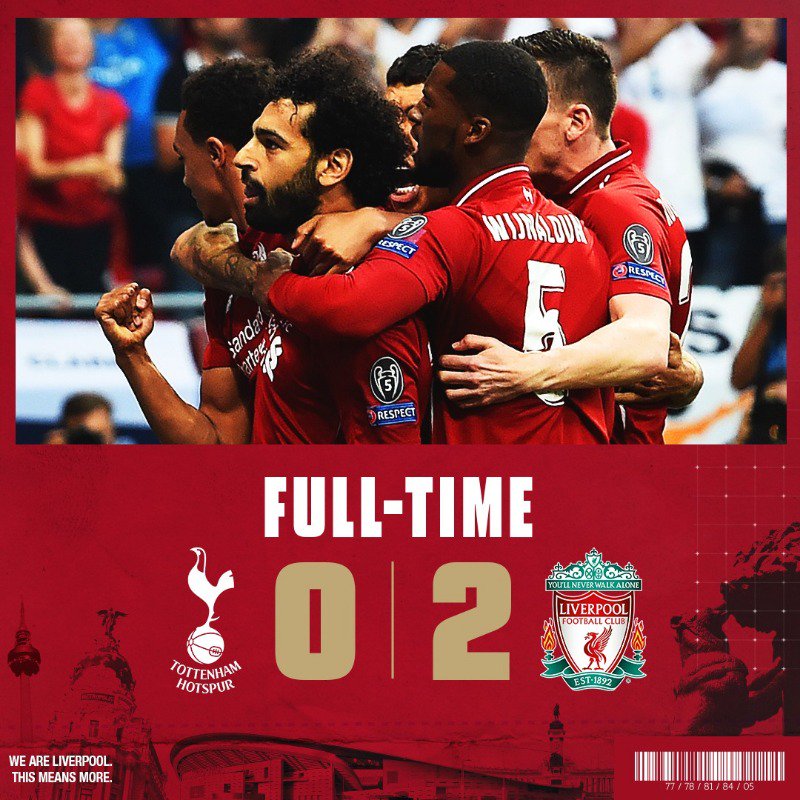 Both managers made big calls with the starting line up they named. Liverpool manager Jurgen Klopp made three changes from the team that beat Barcelona at Anfield with Roberto Firmino coming into the lineup after recovering from a groin injury that kept him out of the Reds last three matches.

Pochettino also made the big call to drop semi-final hero Lucas Moura in favour of talisman Harry Kane despite not playing since April 15. 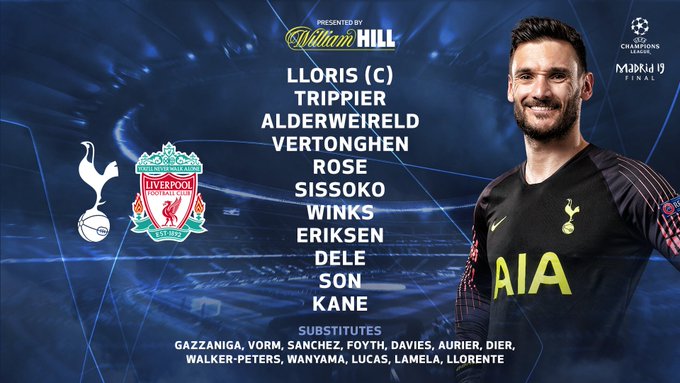 Liverpool started on the front foot and they took the lead through a Mo Salah penalty in the opening minutes after Moussa Sissoko blocked Mane’s ball with his hands in the box. 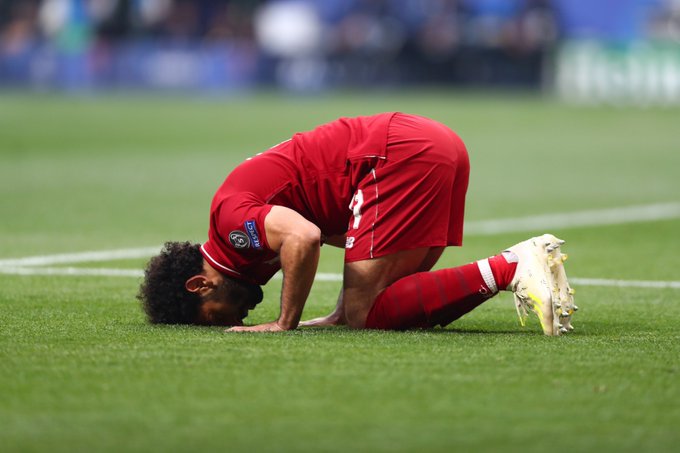 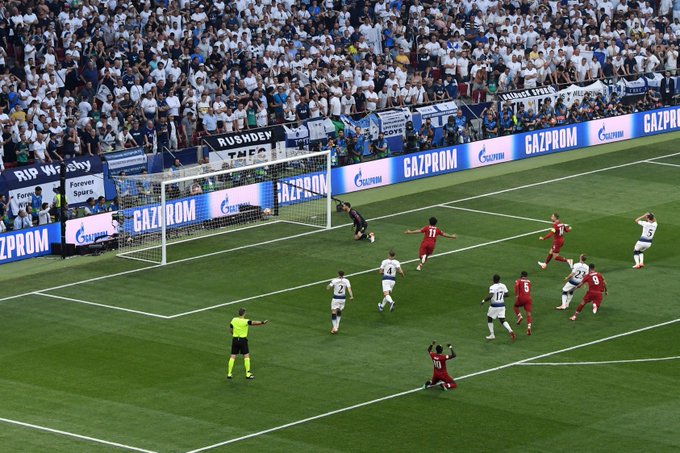 01:48 – Mohamed Salah’s opener for Liverpool is the second fastest goal in a Champions League final, only behind Paolo Maldni (00:50) for AC Milan versus Liverpool in 2005. Blocks. #UCLfinal

It hall happened straight from the kick-off as a long ball was played from Liverpool’s half into the path of Sadio Mane who then tried to feed Roberto Firmino in the Spurs box but his cross was blocked by Moussa Sissoko leaving referee Damir Skomina with no option than to point to the penalty spot. Mo Salah stepped up to take the penalty and duly converted to give Liverpool the perfect start.

Spurs tried to get back in the match immediately through Moussa Sissoko but the French international’s shot from outside could only found the crowd at Liverpool’s end. The Lilywhites continued to dominate possession but it was Liverpool who almost doubled their lead as Trent Alexander Arnold tried his luck from distance, but his effort was just wide of the far corner.

But from that moment onwards, the match was played at a slow pace with both sides struggling to pin passes together will Liverpool happy to sit deep and defend their early goal. The next highlight of the game came when a woman was in her swimming trunk ran unto the pitch before she was caught by the stewards and taken away. 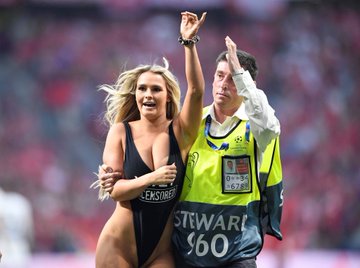 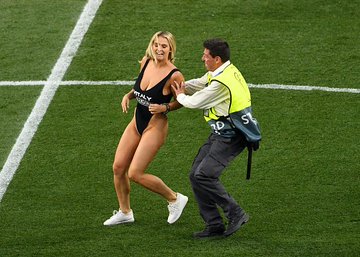 See person mama o! Guess she must have staked her life on a bet

However, the real action continued to lack a bit of spark until a Liverpool left-back Andy Robertson tested Spurs Goalkeeper Hugo Lloris from distance. It proved to be the last real action of the half as Klopp’s men went into the half with the lead. 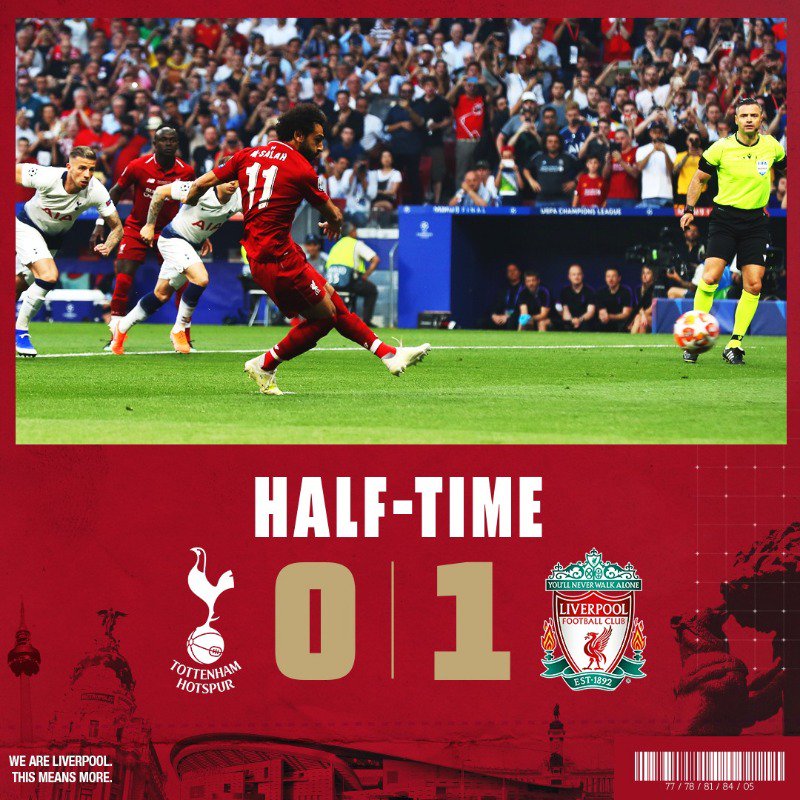 The second half started with Spurs on the ascendancy with Moussa Sissoko once again in the thick of the action. The former Newcastle man picked out Christian Eriksen who then played in Harry Winks on the right but he’s well shut out by Andy Robertson. Pochettino’s men continued to dominate and this time it was Dele Alli to test the Liverpool’s defence but his shot was well blocked by Trent Alexander Arnold.

Sensing his team are being put under too much pressure, Liverpool manager Jurgen Klopp decided to switch things up by bringing in Divock Origi and James Milner for Roberto Firmino and Gini Wijnaldum respectively. Pochettino also tried to match his opposite number by bringing in Lucas Moura and Eric Dier for Harry Winks and Moussa Sissoko.

The substitution appeared to bring Spurs to life as they managed their first shot on target but Son’s shot was parried away by Alisson while the follow up by Lucas Moura was also kept out by the Brazilian.

With ten minutes to go, Spurs kept on pushing and they almost got levelled through a Christian Eriksen freekick but the Danish’s effort was once again kept out by Alisson. However, Spurs will be left to rue those missed chances as Liverpool doubled their lead through Divock Origi.

Spurs defence failed to deal with a Liverpool corner properly, allowing the ball to fall into the path Divock Origi who finished perfectly into the bottom corner.  It proved to be the last action of the match as Liverpool banished the memories of last season.