A Nigerian businessman took to Twitter to send out a troubling cry for help, claiming SARS officials were trying to kill him.

He tweeted: “Nigerians please save me from men of SARS…. They want to kill me, Iyana iba”

His tweet quickly went viral as Nigerians rallied round, making efforts to get him to safety.

He later gave an update two hours after his initial tweet.

He explained that the officers hit him with a gun at Iyana-Iba and were going to shoot him on his leg. His crime, he said, was carrying letter-headed papers of his PR company.

He added: “These guys are armed robbers and not anti-robbers, damn! I swear down, they were even smoking as they were negotiating prices with the young guys they arrested”

He said he eventually made a call to someone higher up. He explained that after the call, he was driven to the station to meet with the DPO. At the station, he said they asked him some questions and later released him.

READ ALSO  Atiku vs Buhari: Summary of what happened at presidential election tribunal on Wednesday

He wrote: “I really appreciate everyone. Thank you so much I’m fine now. But what if I didn’t had anybody to call? And obviously I don’t have one naira to give them.”

Read his narration of events from the bottom to the top. 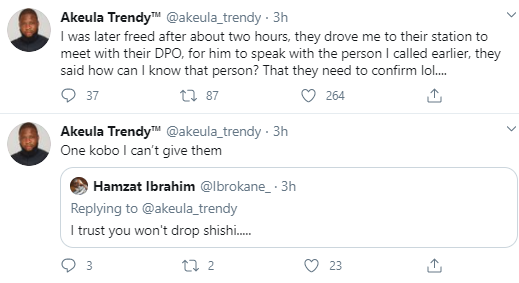 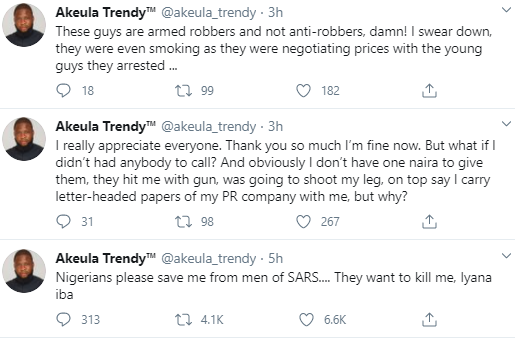